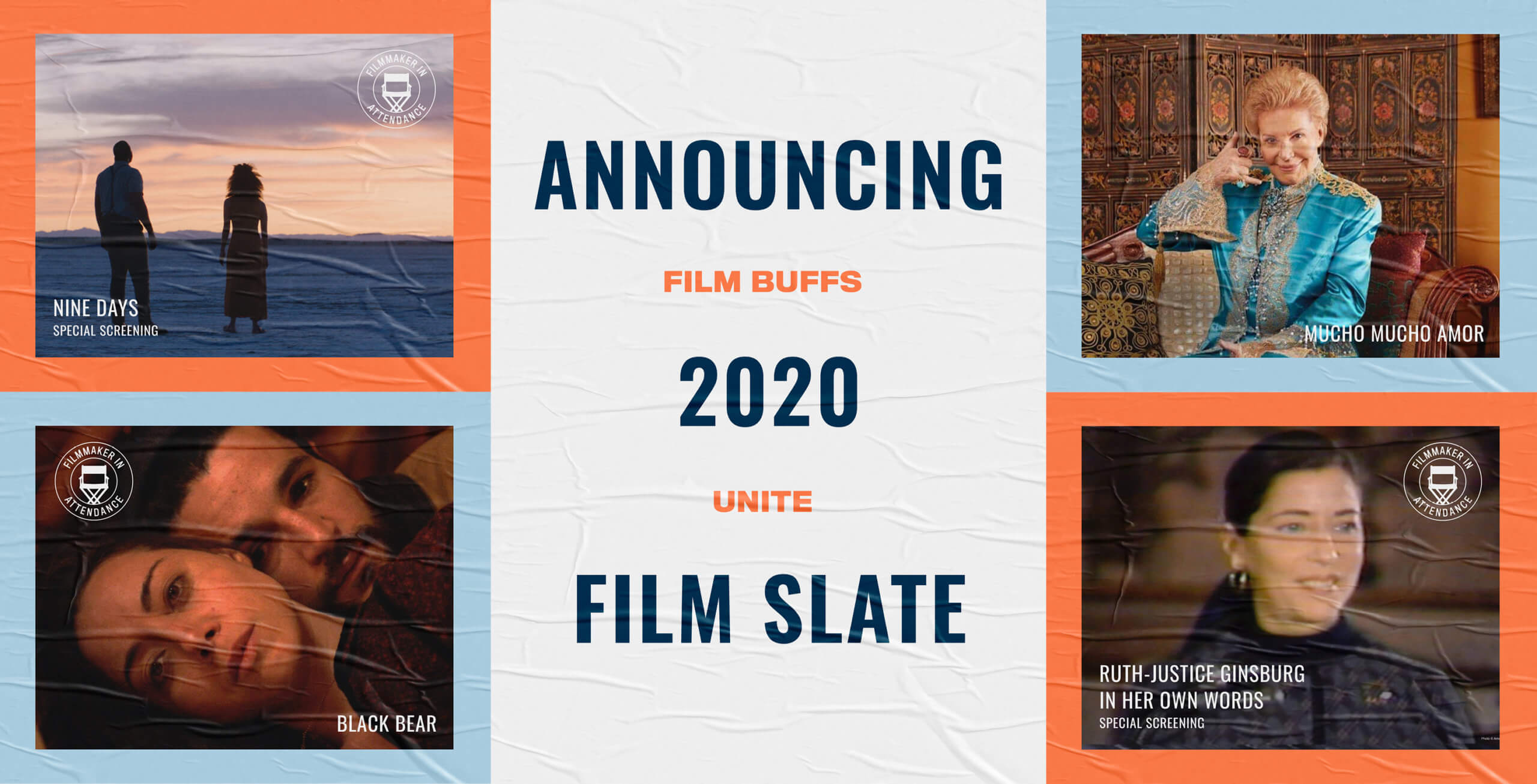 “RUTH – Justice Ginsburg in her own Words” to kick-off Fest;

The festival will open on March 18 with a special presentation of the documentary RUTH with director and Sun Valley local resident Freida Lee Mock attending.

Select films will screen at the Argyros Performing Arts Center in Ketchum and the Sun Valley Opera House in Sun Valley. Additional films, including the slate of selected short films, will be announced on the festival website at a later date.

SVFF is well-known for its innovative programming which provides opportunities for support and mentorship of the emerging voices of up and coming filmmakers.

An exciting new addition for 2020 is the Ford Pitch Fest. Three finalists will have the opportunity to pitch their film to a panel of award-winning producers, and one will walk away with a $25,000 Ford Producers Grant to take their project one big step closer to reality.  The event will be hosted by actor/producer Will McCormick and the panelists include Jim Burke (Academy Award® winning producer of Best Picture winner Green Book, The Descendents), Michael Burns (Vice Chairman, Lionsgate), Heather Rae (Trudell, Frozen River, Tallulah) and Effie T. Brown (Dear White People, Real Women Have Curves, Everyday People). Attendees will get the chance to participate in this typically behind-the-scenes process, including a Q&A with both panelists and finalists. The winner will be announced live at the end of the event.

Variety will once again present the popular Sun Valley Screenwriters Lab with SVSLab host, Academy Award® winning writer Stephen Gaghan, (Traffic, Syriana, Dolittle), one of the most acclaimed and accomplished filmmakers of his generation. Submittable has teamed up with SVFF to present the High Scribe Award during the SVSLab event, which honors an emerging voice in screenwriting, and now includes a residency and mentorship program.

The Sun Valley Film Festival will feature three nights of parties with live music, including Sorry I Like to Party Party on Thursday with local rockers El Stash, the Main Street Salutes a Legend street party to celebrate the return of the legendary Ford Bronco and Pioneer Party on Friday night featuring ‘soul clappin’ counterculture sounds of the Kris Lager Band and a high energy finale with American indie rock band The Unlikely Candidates headlining the Saturday Night Awards Bash, one of the Festival’s most anticipated events.

The Sun Valley Film Festival, presented by Ford Motor Company, has a long history of supporting and creating career-changing opportunities for filmmakers and independent artists the world over. With over 4,500 yearly attendees, SVFF is quickly becoming known as the Festival for Filmmakers: a boutique event beloved by film fans and auteurs alike.  Over 80% of the films in the 2020 SVFF slate will have filmmakers in attendance to participate in Q&As after the screenings. The Festival will also expand its commitment to providing career-changing opportunities for independent writers and filmmakers by awarding over $200,000 in prizes through its new Ford Pitch Fest, Screenwriters Lab, the Film Lab and Wild to Inspire competitions, among others.

At a remote lake house in the Adirondack Mountains, a couple entertains an out-of-town guest looking for inspiration in her filmmaking. The group quickly falls into a calculated game of desire, manipulation, and jealousy, unaware of how dangerously convoluted their lives will soon become in the filmmaker’s pursuit of a work of art, which blurs the boundaries between autobiography and invention.

The seemingly separate lives of an anxious, disillusioned teen girl and a troubled, alienated man converge fatefully in this haunting exploration of womanhood, isolation, and toxic masculinity, set in 1980s Newfoundland.

On the outskirts of Houston, a teen reeling from her mom’s incarceration and an aging bullfighter struggling to keep a foothold in the rodeo circuit, form an unlikely bond and attempt to right their own paths.

A on-the-lam punk rocker and a young woman obsessed with his band unexpectedly fall in love and go on an epic journey together through America’s decaying Midwestern suburbs.

Stanley (Richard Jenkins), an aging fast-food worker, plans to call it quits after 38 years on the graveyard shift at Oscar’s Chicken and Fish. His last weekend takes a turn while training his replacement, Jevon (Shane Paul McGhie), a talented but stalled young writer whose provocative politics keep landing him in trouble. The men are worlds apart. A high school dropout who has watched life pass by his drive-through window, Stanley proudly details the nuances of the job. Jevon, a columnist who’s too smart to be flipping patties, contends their labor is being exploited. But a flicker of trust sparks during the long overnight hours in a quiet kitchen.

The issue of migrant labour gets a winningly light touch in this musical comedy — and debut fiction film — from documentarian María Paz González, about a Peruvian woman working as a domestic helper for a wealthy Chilean family who prepares for a trip home to visit the son she left behind.

An aging neuroscientist teams up with a group of young graduate students to prove his hypothesis that individuals with disabilities hold the key to unlocking a sixth sense before his past catches up with him.

Directed by Peter Cattaneo and starring Kristin Scott Thomas and Sharon Horgan, MILITARY WIVES centers on a group of women in England whose partners are away serving in Afghanistan. Faced with the men’s absences, they form a choir and quickly find themselves at the center of a media sensation and global movement.

Written and directed by Eliza Hittman, Never Rarely Sometimes Always is an intimate portrayal of two teenage girls in rural Pennsylvania. Faced with an unintended pregnancy and a lack of local support, Autumn (Sidney Flanigan) and her cousin Skylar (Talia Ryder) embark across state lines to New York City on a fraught journey of friendship, bravery and compassion.

In a house distant from the reality we know, a reclusive man interviews prospective candidates — personifications of human souls — for the privilege that he once had: to be born.

ONCE UPON A RIVER

After her father’s violent death, Native American teenager Margo Crane flees down Michigan’s Stark River in search of her estranged mother. On the way, she encounters allies, enemies, danger, and the beauty of nature, all while coming to grips with her past and her own identity. A Midwestern Gothic coming-of-age fable set along the riverbanks, Chicago musician-filmmaker Haroula Rose’s debut feature is an evocative marriage of Winter’s Bone and Huckleberry Finn.

A teenage girl suddenly finds herself struggling to take care of herself and her younger brother.

Determined to become the leader of the Dominion of Canada, a young W.L. Mackenzie King rises to power.

A hidden underground network — a collaboration of four kingdoms of life — is revealed. Explore a true first-contact story between humans and beings who communicate with a symbolic language and have maintained a representative democracy for tens of millions of years.

The rise, fall, and rise again of a Cambodian refugee who escaped genocide and overcame poverty to build a life for himself — and hundreds of other immigrant families — by baking America’s favorite pastry and building an unlikely empire of donut shops.  Everything you thought you knew about the donut begins with Ted Ngoy.

A meticulous reconstruction of the 1979-1980 crisis, when Iranian revolutionaries

held 52 American citizens hostage at the US Embassy in Tehran. What emerged was a secret rescue mission. Desert One chronicles that operation with details and archives that have never before been revealed. The crisis culminated in Carter’s landslide loss to Ronald Reagan in 1980.

Jane Goodall: The Hope follows the inspirational activist and leader throughout her never-ending travels, capturing her relentless commitment and determination to spread a message of hope.

On June 8, 1924, at just 800 vertical feet from the summit of Mount Everest, British explorers George Leigh Mallory and Andrew “Sandy” Irvine were swallowed by a storm cloud and never seen again. LOST ON EVEREST attempts to find Irvine’s remains and the camera he is believed to have carried that final day, as the film inside could rewrite history. Armed with a team of elite climbers who have new intel on the location of Irvine’s body, the daring special sets out to solve one of exploration’s greatest mysteries.

Every day for decades, extravagant Puerto Rican astrologer, psychic, and gender nonconforming legend Walter Mercado charmed the world with his televised horoscopes. Equal parts Oprah, Liberace, and Mr. Rogers, Walter reached over 120 million viewers at his peak, enthralling the Latin world with sequined capes, opulent jewelry and horoscopes that shared a message of love and hope to his devoted viewers. Then, he mysteriously disappeared.

On the morning of Nov. 8, 2018, a devastating firestorm engulfed the picturesque city of Paradise, California. By the time the Camp Fire was extinguished, it had killed 85 people, displaced 50,000 residents and destroyed 95% of local structures. It was the deadliest U.S. fire in 100 years — and the worst ever in California’s history. In REBUILDING PARADISE, Academy Award winning director RON HOWARD led a filmmaking team to the city and would go on to spend a year with Paradise residents, documenting their efforts to recover what was lost. The Camp Fire and its overwhelming aftermath became a de facto lesson in what we all must do: protect our environment, help our neighbors, plan for future dangers and remember to preserve the traditions that unite us.

The film tells the improbable story of how Ruth Bader Ginsburg, who couldn’t get a job despite tying first in her graduating law class and making Law Review at Harvard and Columbia Law Schools, became an Associate Justice of the Supreme Court. It also reveals both the public and private sides of a resilient, resourceful woman who has survived the hostility of the profoundly male universe of government and law to become a revered Justice and icon for gender equality and women’s rights.

Mariana van Zeller embarks on a harrowing road trip from Los Angeles to Sinaloa, Mexico to uncover how a lethal supply chain of American firearms is arming the cartels and fueling violence throughout Mexico.

WE ARE AS GODS

“We are as gods and might as well get good at it,” Stewart Brand wrote in ‘68. The legendary pioneer of LSD, cyberspace, futurism, and modern environmentalism now urges people to use our god-like powers to fight extinction by reviving lost species.

FOR WALTER AND JOSIAH

​A small native community in rural Montana experienced a cluster suicide epidemic (22 suicides in a single year) – two of these deaths  were members on the same basketball team, Walter and Josiah.

Soaring above the chaotic spectacle of ‘80s and ‘90s Los Angeles, a young couple revolutionized breaking news with their brazen helicopter reporting. Culled from this news duo’s sprawling video archive, WHIRLYBIRD is a poignant L.A. story of a family in turbulence hovering over a city unhinged.

Passes for the 2020 Festival can now be purchased at www.sunvalleyfilmfestival.org.